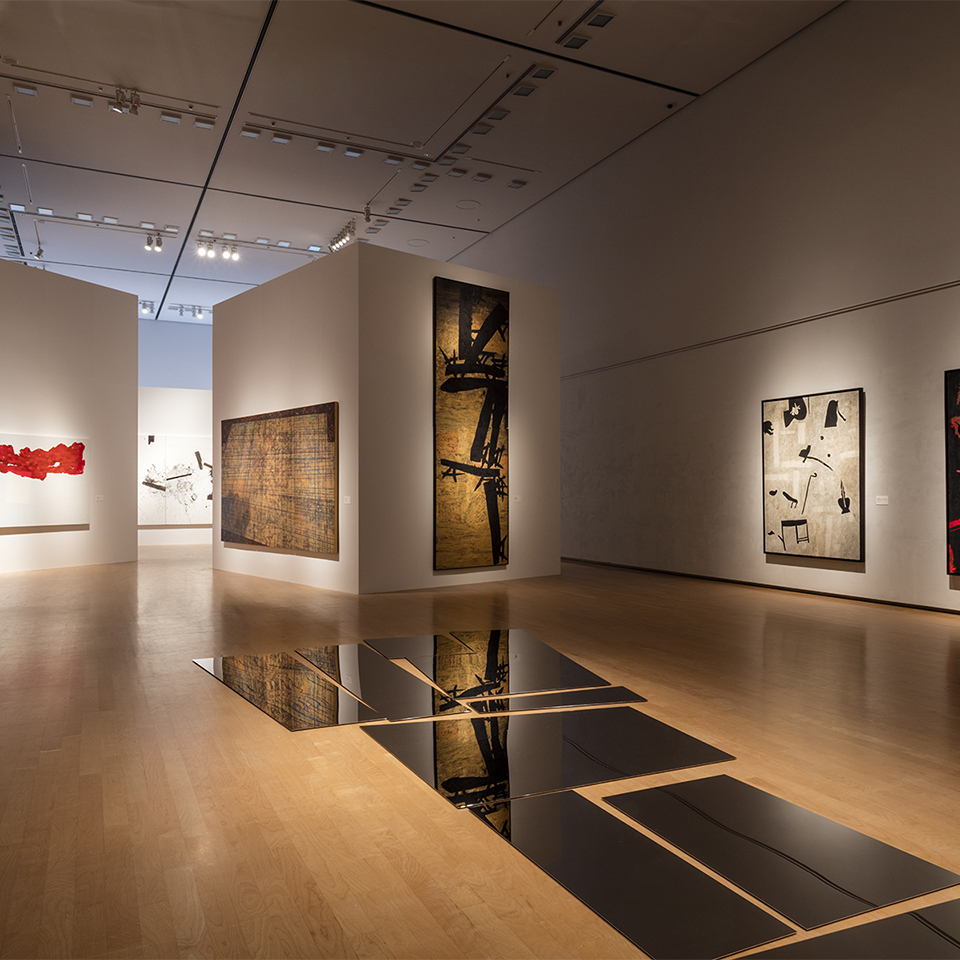 Noiz recently designed an exhibition named "Out of the Mountains: Wang Huaiqing Solo Exhibition" held at Hyogo Museum of Art in Japan. It is the first large-scale retrospective of Wang Huaiqing, one of the most influential contemporary painters in the world. Upon seeing Wang's works, we were intrigued by the unique merge of abstract geometric motifs that originated from Wang's Chinese heritage and unexpected materiality. We were also very attracted by the traces of delicate handwork, textures and the minimal color palette in Wang's paintings. Although the sizes varied, most of the paintings carried a grand yet sensitive presence.

In response to these qualities, noiz designed several large boxes instead of typical partition walls and installed them in the middle of the exhibition hall. Each box was carefully coordinated and adjusted many times in proportion, size, orientation, as well as overall density to create unique momentum in space. The boxes allowed the hall to remain as a grand room, without being sub-divided into rooms, while providing a series of subtly varied space in terms of size and proportion.

Special efforts were paid to the key work of this exhibition, Out of the Mountains. The particular painting boldly extend from the wall to the floor defying the boundary between two and three-dimensions. We, therefore, created an extra large box with extended viewing distance. The main artwork was installed on the exterior surface of the largest box, while some of Wang's related sketches were installed inside the box. The interior surfaces of the box were painted in a dark and warm color aimed to enhance the enclosure and intimacy of the space and the works it hosted in contrast with the vast openness of the main gallery.

Overall, the exhibition design aimed to create an impression of an infinite abstract mountain range that links time and space, echoing the theme of the exhibition. The art pieces were intentionally arranged not by their chronological order but by their size and style. This seemingly random arrangement invited the visitors to freely stroll back and forth, creating their own paths toWangs works as if they were exploring a dynamic landscape. 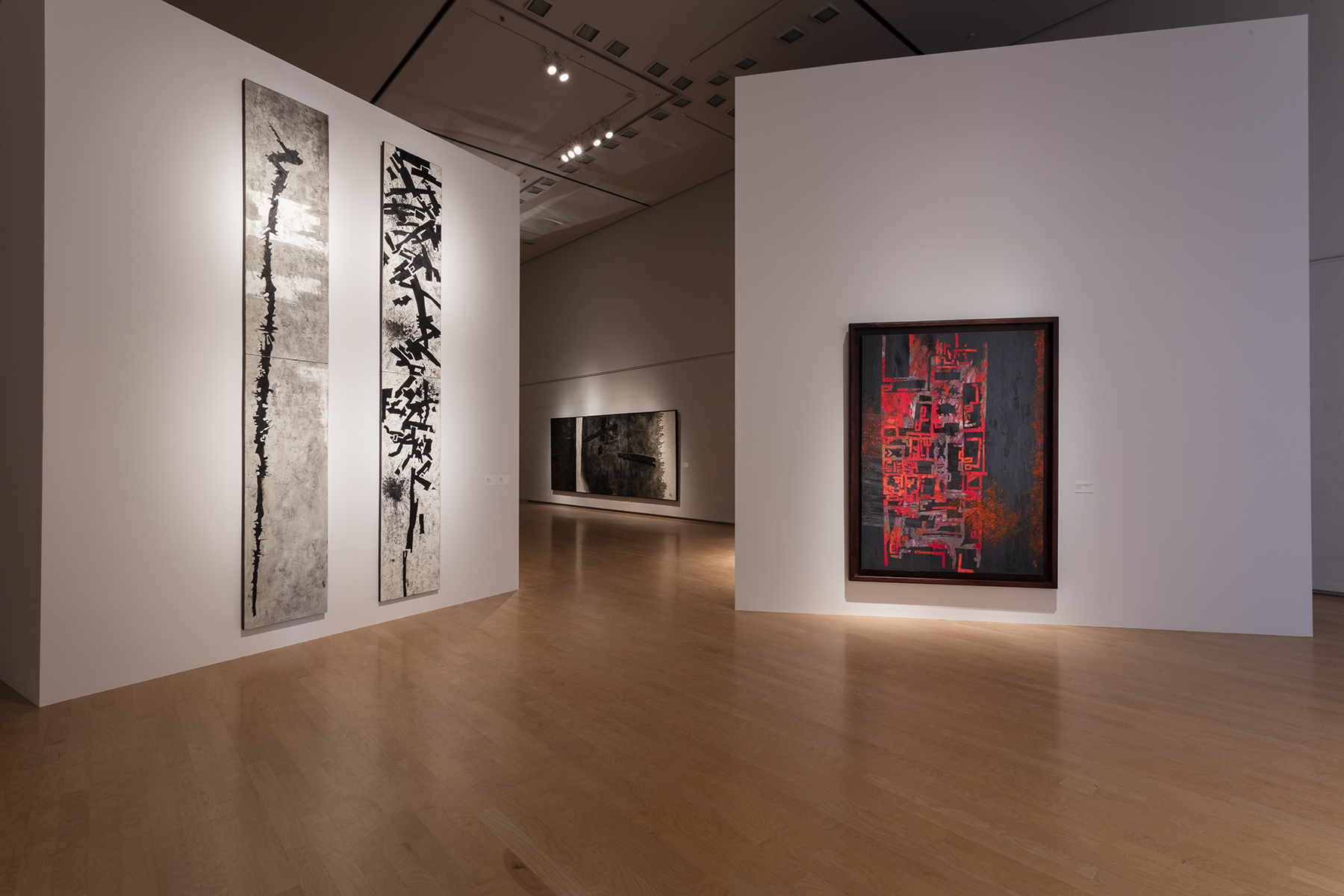 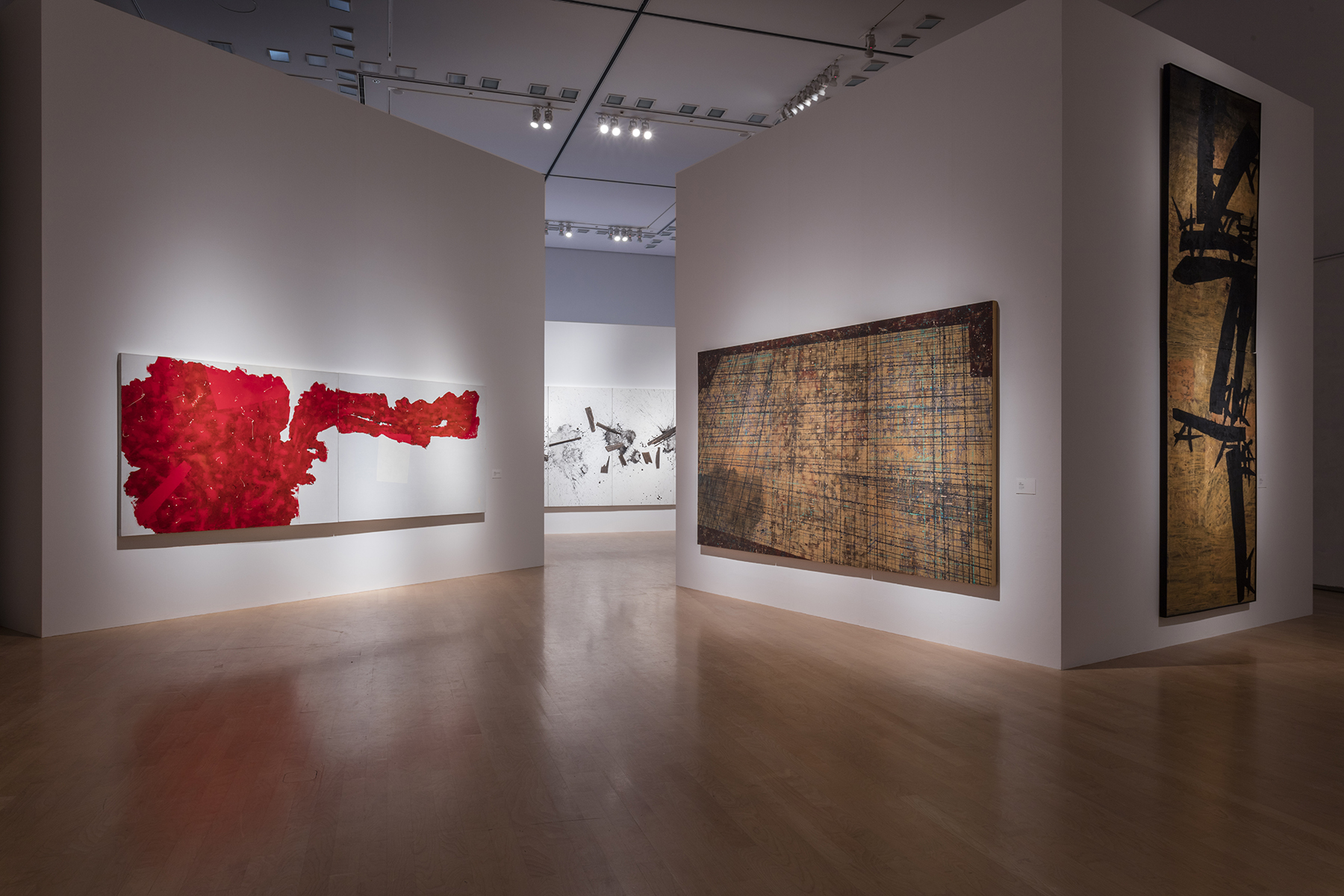 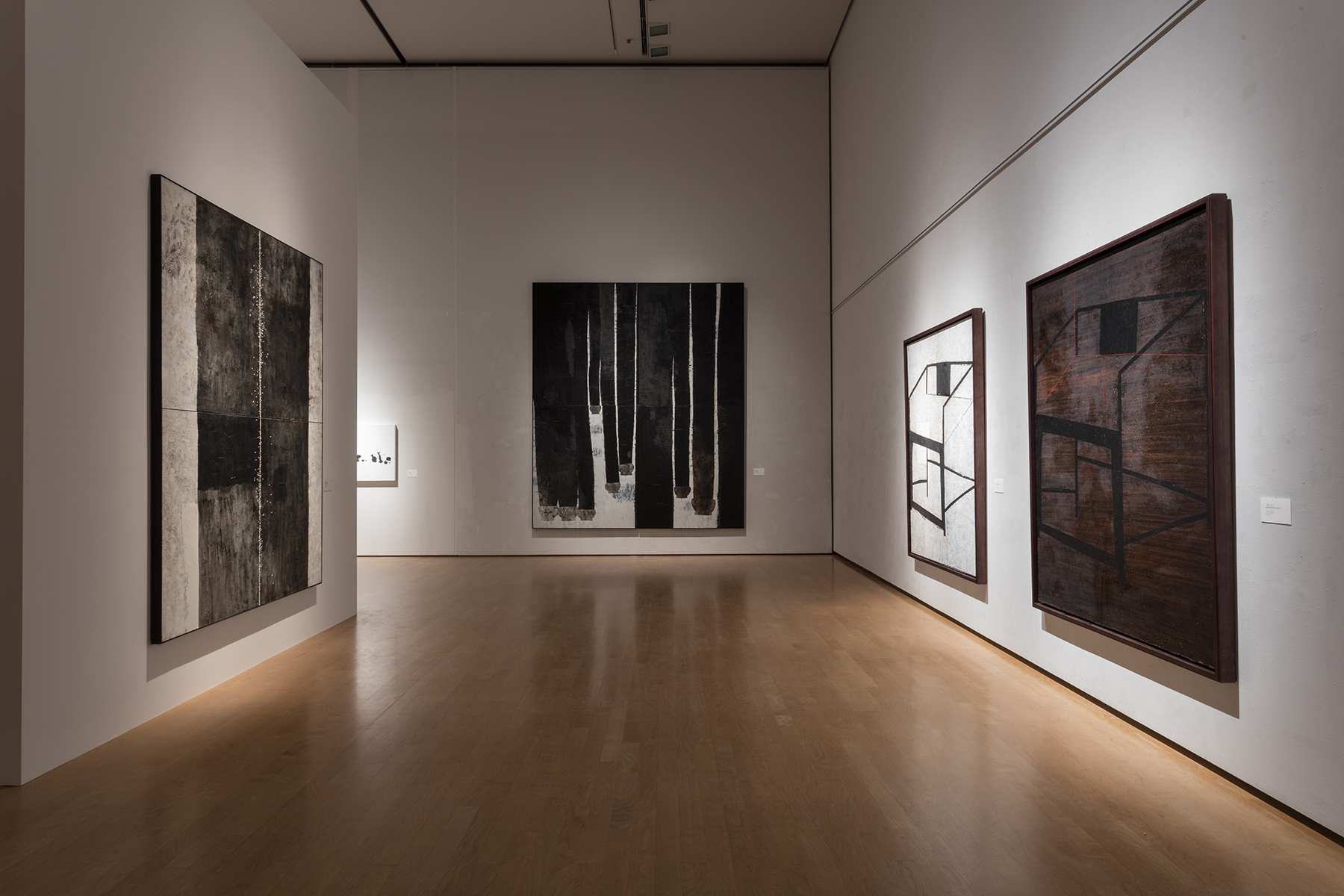 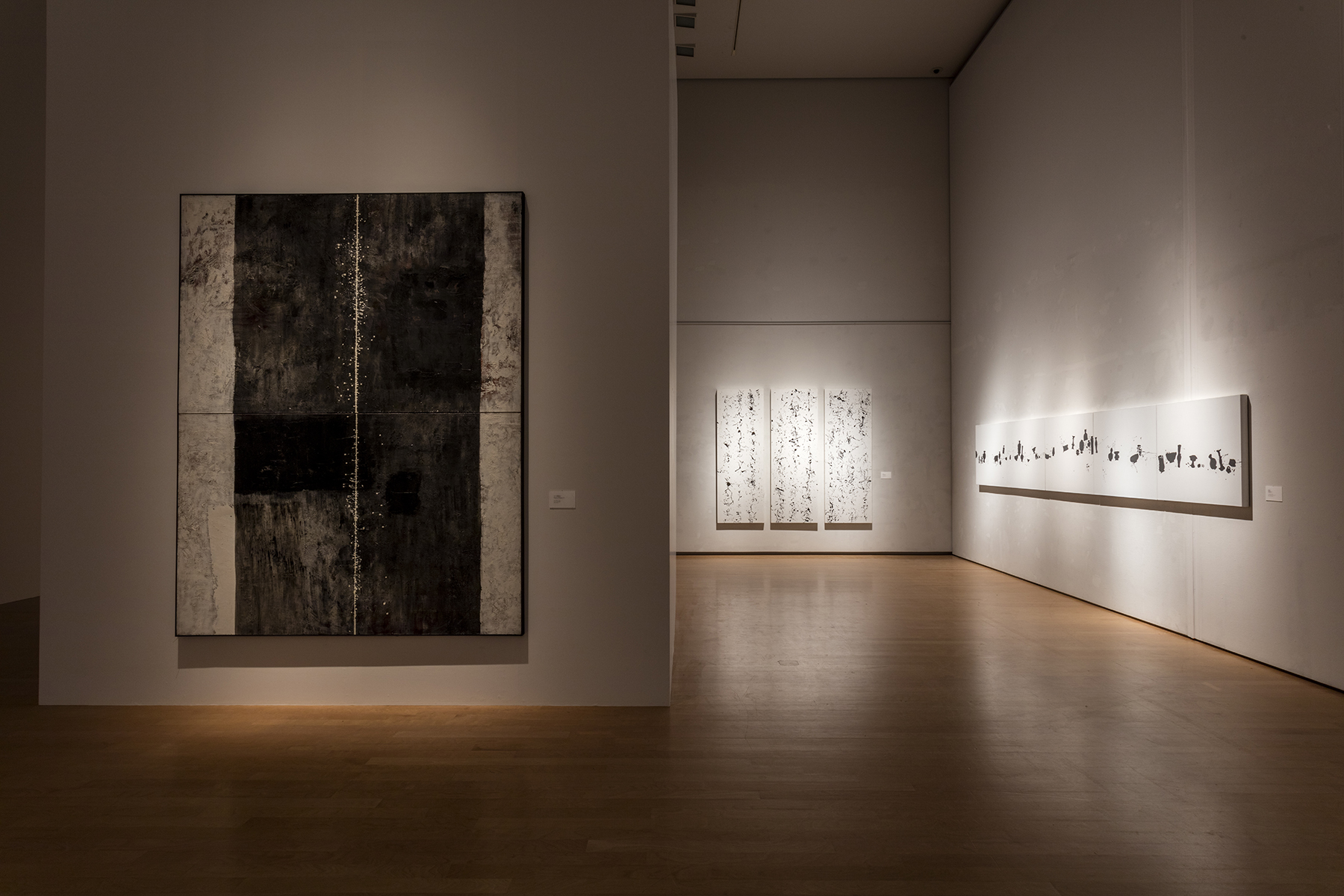 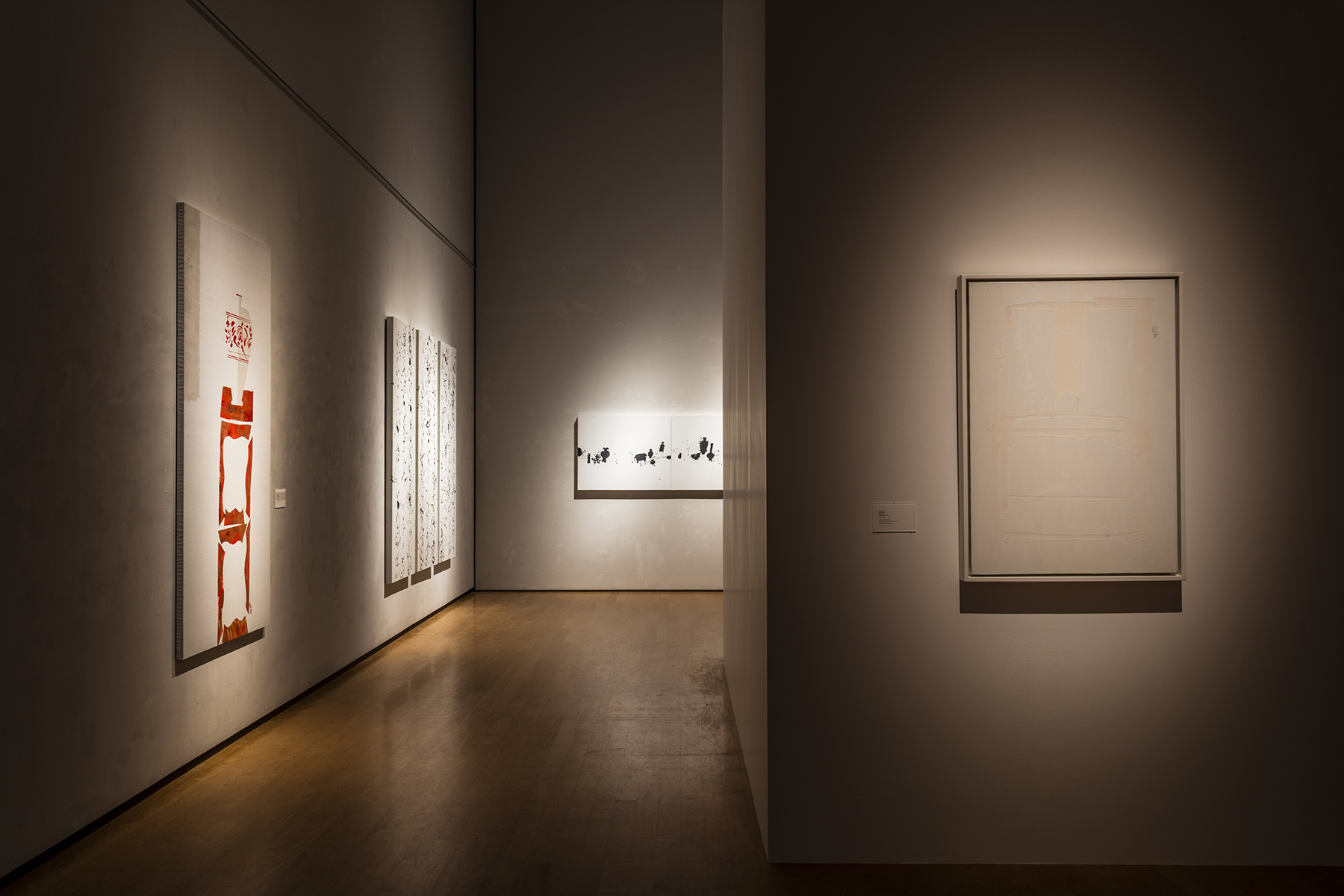 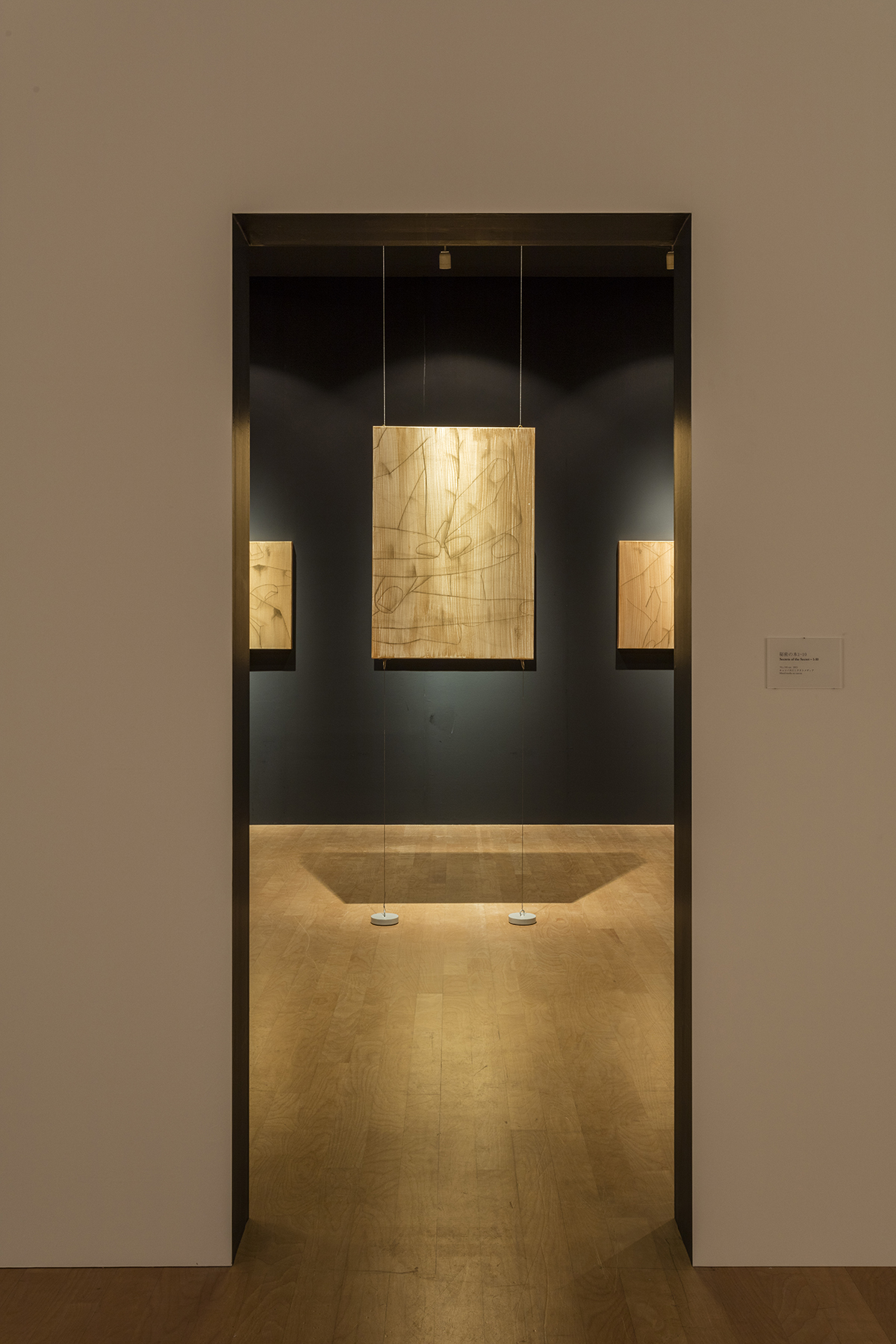 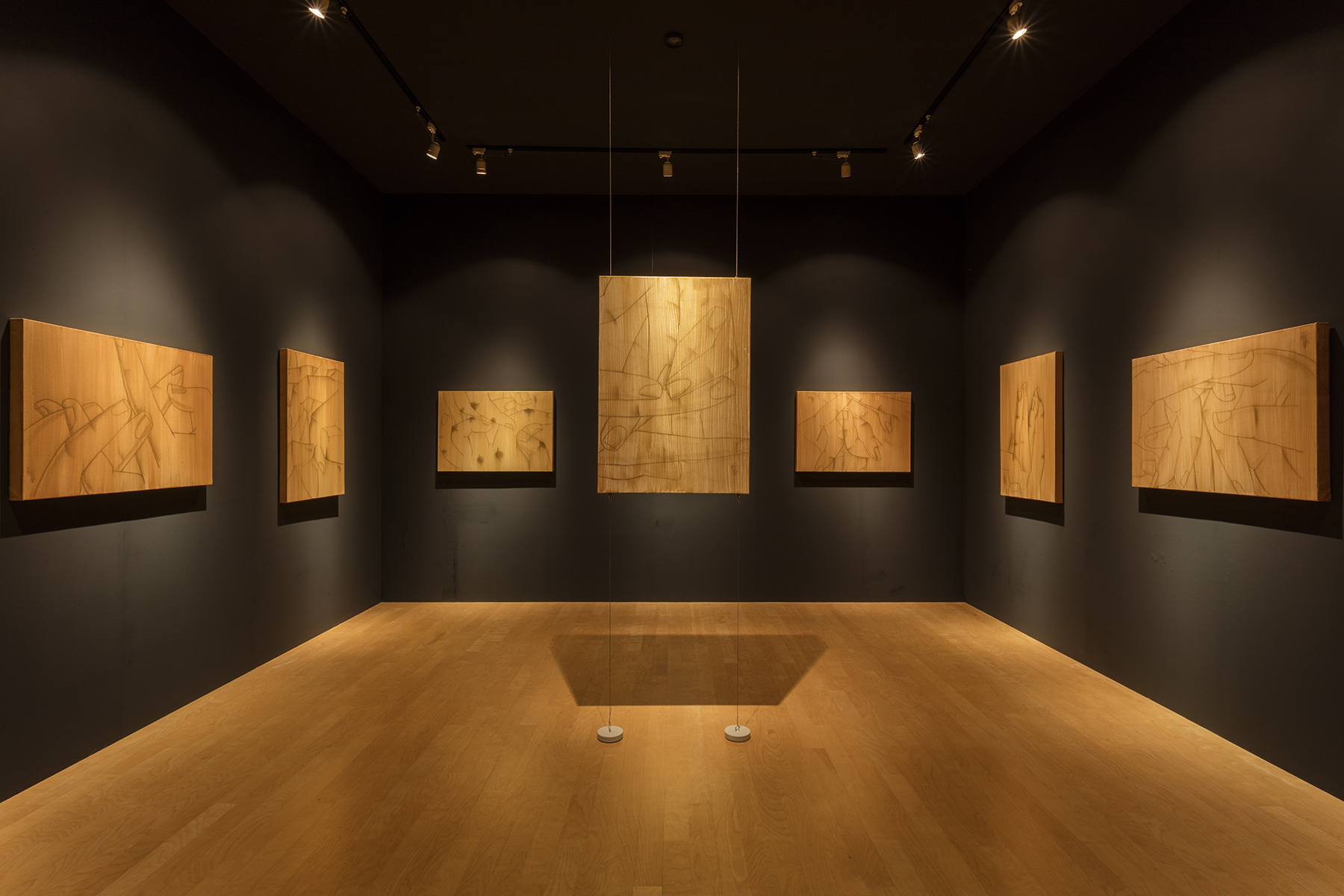 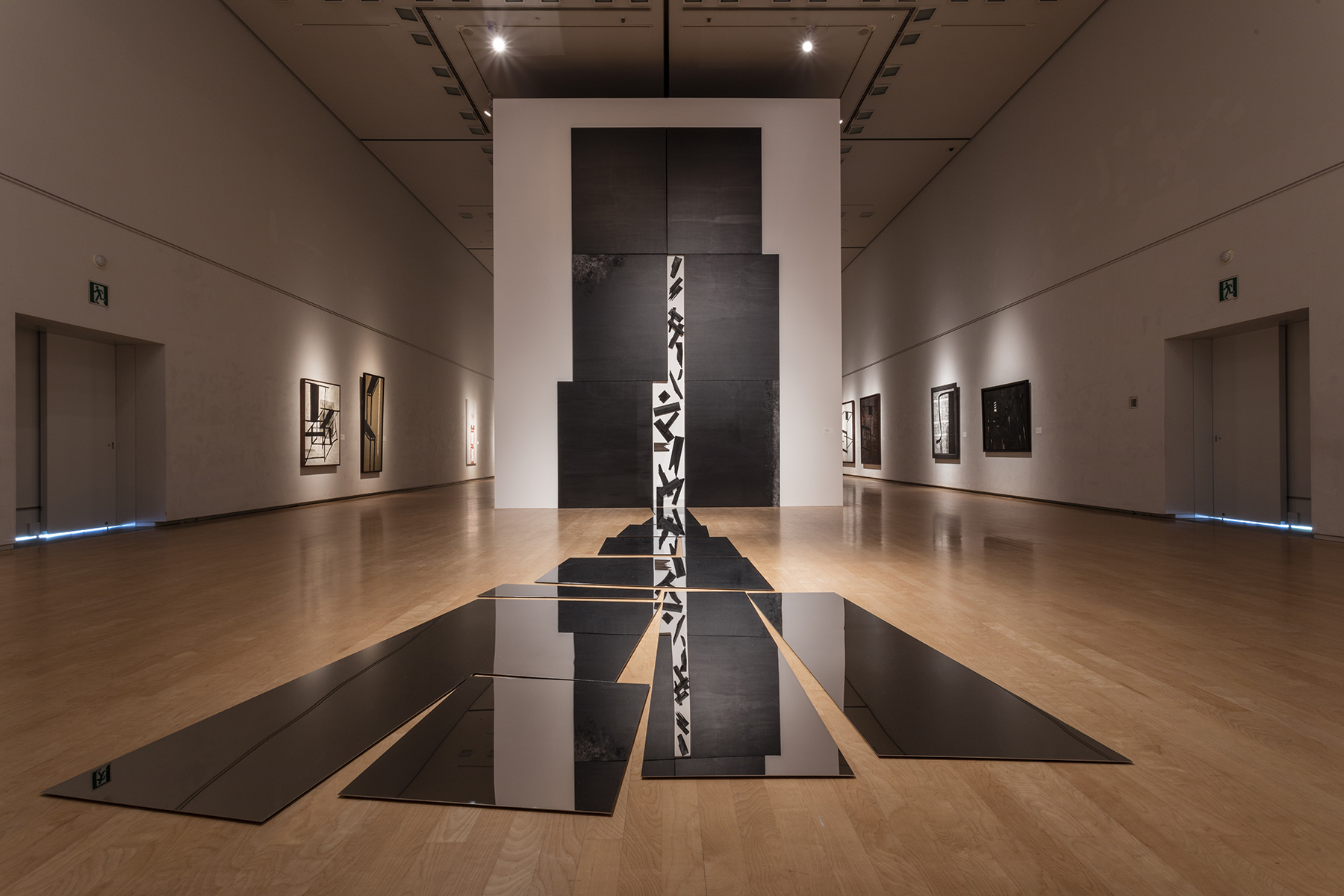 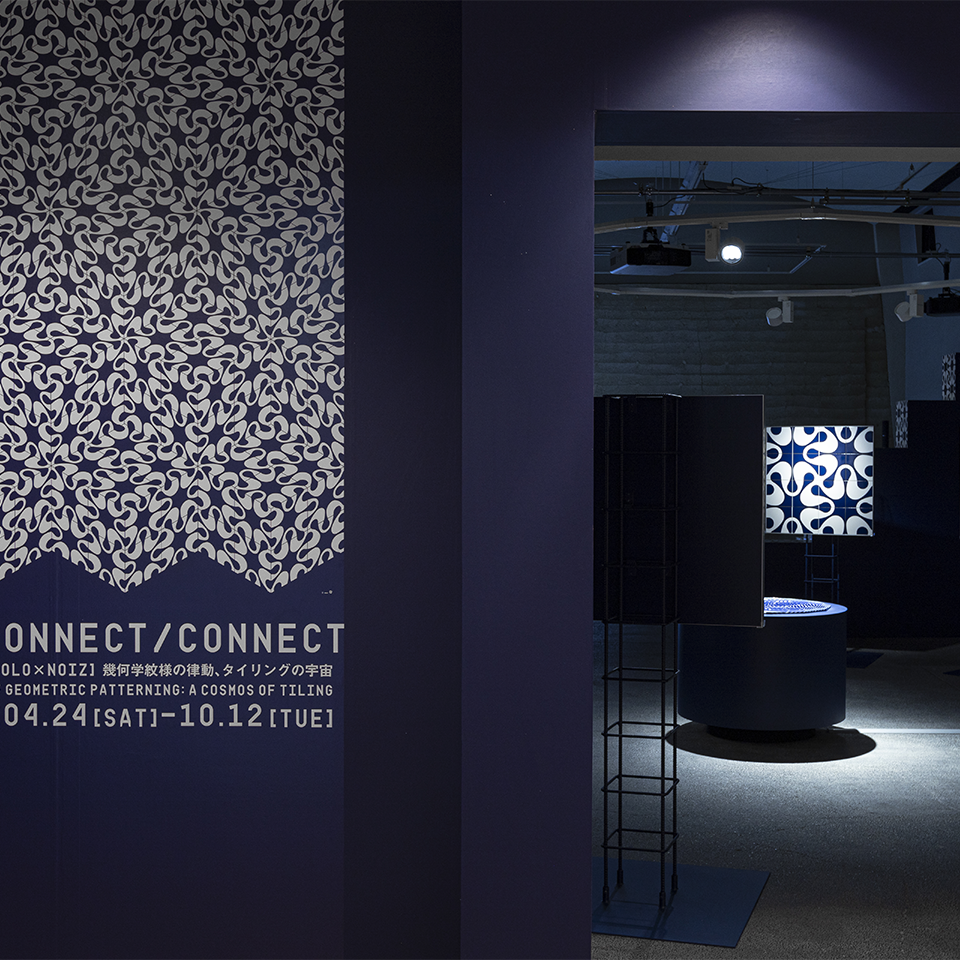 DISCONNECT/CONNECT【ASAO TOKOLO×NOIZ】Rhythms of Geometric Patterning: A Cosmos of Tiling
EXHIBITION 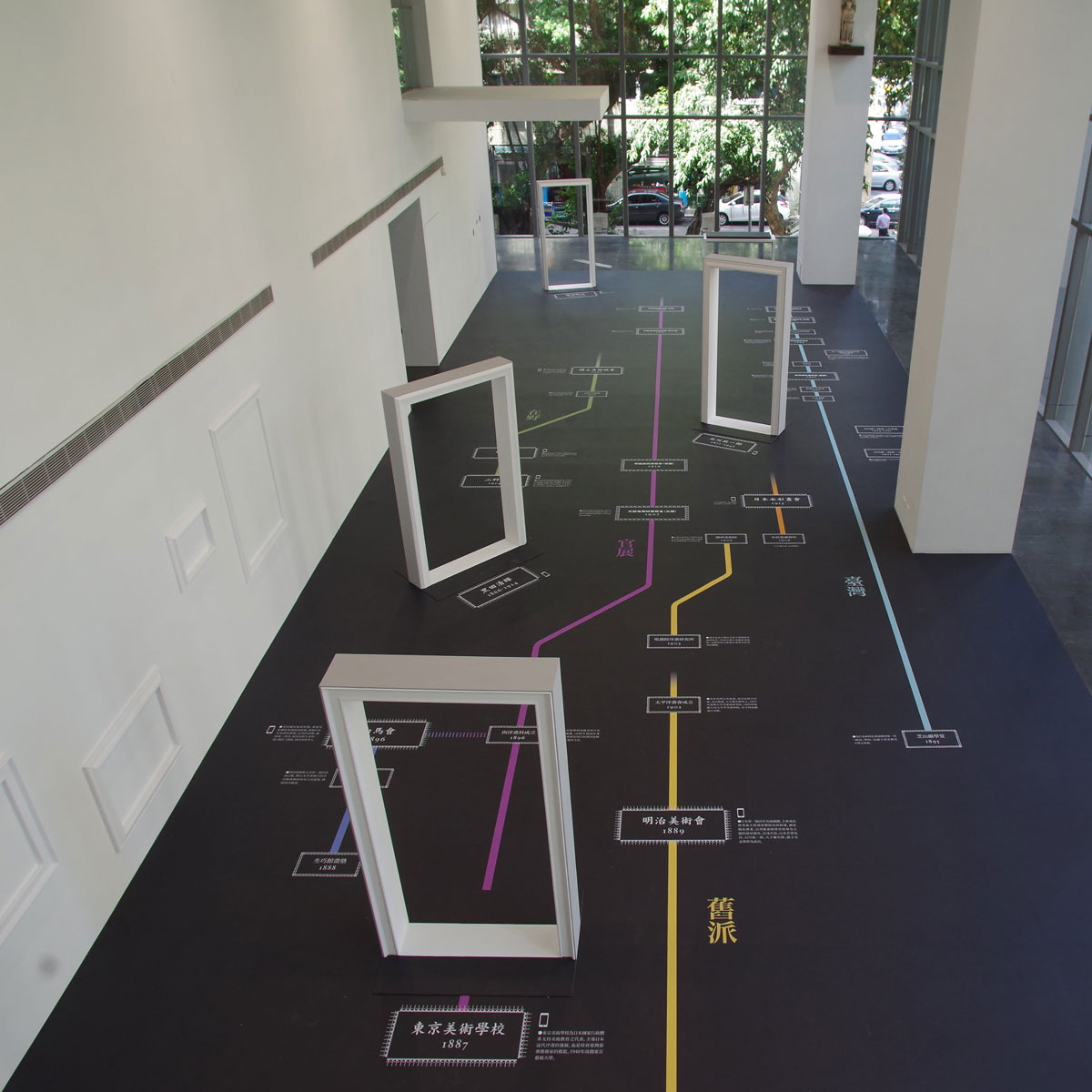 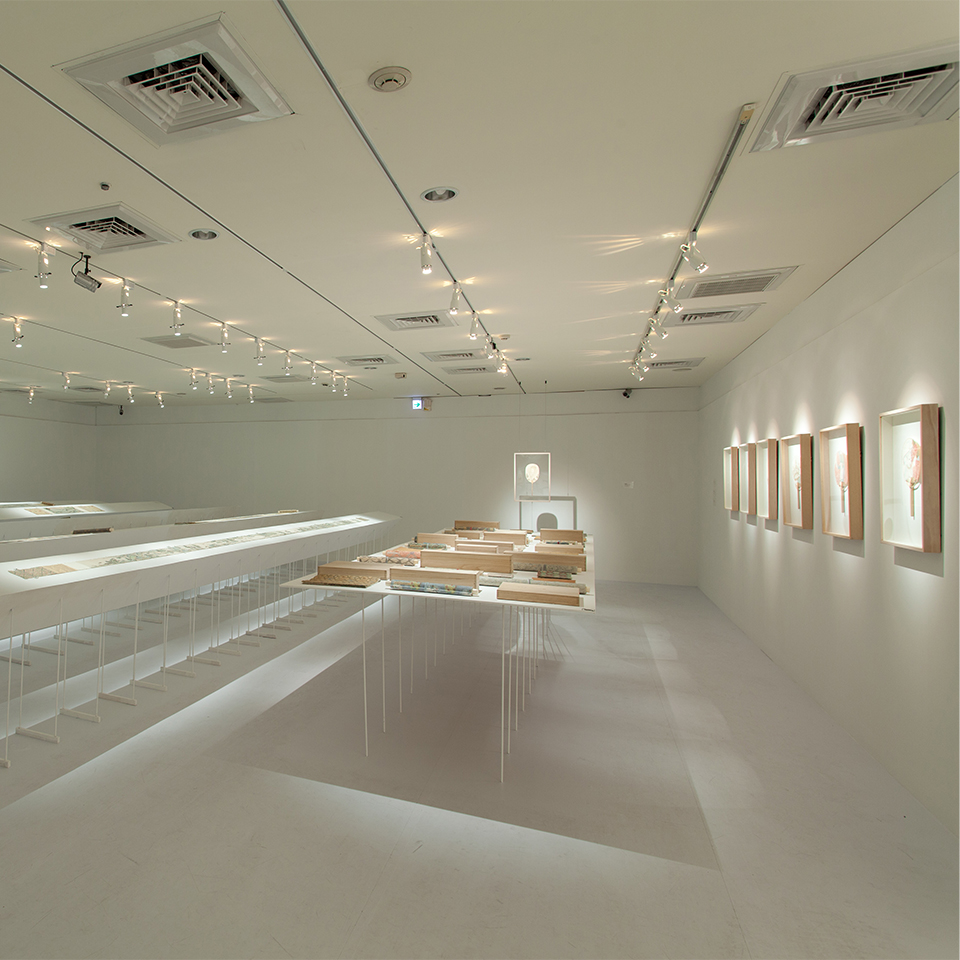